Coverage varies across the continent, from one ATM in the capital to thousands spread throughout the country. Check our list and web links on p.144. 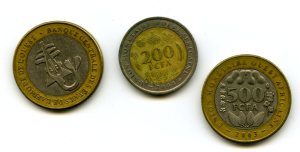 Africa and the US dollar

People are widely suspicious of US$100 bills, which have acquired some notoriety as popular subjects for counterfeiting. Businesses will often refuse them, especially if they are more than five years old. The details of the practice vary from country to country. However, small denomination notes are often unacceptable, too, as the rates for exchanging them back into local currency can be poor. . .

The 55 countries and territories covered in “First-Time Africa” use forty different currencies. See Chapter 9 for the full story, including details about cash, cards, costs, bargaining and the so-called black market.

Petty bureaucracy is deeply engrained in Africa and you will often be given a handwritten, carbon-copied and sometimes even rubber-stamped receipt after making the most elementary payment. If you doubt whether the sum you’re being asked to pay is officially sanctioned, however – for example, an obscure entrance fee, a fee for a guide, or on occasions when police try to impose an on-the-spot fine – just asking for a receipt will often clarify matters. . .